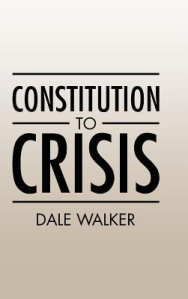 When Greece’s economy collapsed it took an entire continent to solve its federal budget crisis. With the United States heading towards a similar crisis, where will we be able to turn for a solution?

According to the U.S. Department of the Treasury, Bureau of the Fiscal Service, America’s total public debt outstanding is over $19 trillion, a figure that many experts consider an unsustainable trajectory.

This information is nothing new to Dale Walker, DBA and CPA. He is the author of “Constitution to Crisis” and has studied the federal budget in-depth as part of his doctoral dissertation.

In his book, Walker seeks to help readers understand the intricacies of the federal budget and offer suggestions to solve America’s fiscal crisis. He draws on past government budgets as well as the original wording of the Constitution to illustrate how federal debt has evolved over time.

During his research, Walker found that some budgetary problems could be solved if more funding was implemented at the state level. He said this change would not only help the government’s bottom line, but also promote economic growth at the state and federal levels.

“Congress could be more effective if it is limited to constitutional programs such as defense, commerce, treasury and justice,” Walker said.

With “Constitution to Crisis” Walker aims to inform others about the fiscal crisis in America and let them make informed decisions about how the federal budget should be spent.

“The incompetence of Congress in financial matters is unprecedented,” Walker said. “I am hoping my book might play at least a small part in explaining why government is too big and violates the US Constitution in many ways.”

Dale Walker has been a CPA since 1974. He is an adjunct professor at several Arkansas universities and previously served as the city financial director of Cabot, Ark. He holds a Bachelor of Science in accounting from the University of Arkansas at Little Rock, a Master of Business Administration in health services management from Webster University and a Doctor of Business Administration in accounting from Argosy University. He resides in Cabot with his wife.