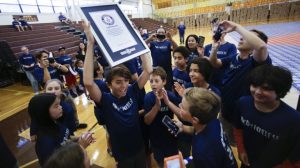 Kenan, is a 13 year old 7th grader from San Diego (Mayor Faulconer already proclaimed 1/23 Kenan Pala Day in San Diego) Kenan’s created his non-profit Kids4Community when he was 11 years old and their programs to fund programs for homeless, education and more has just hit the $500,000 mark in just two years.

Kids4Community was founded by young community organizer Kenan Pala with the help of friends and family. Kenan’s primary goal was to encourage other children his age and younger (like his brother) to get involved in their communities. Kenan’s first major charitable project was setting the Guinness World Record for largest mosaic created using cardboard boxes in 2016. Together, he and his fellow students did a food drive to collect cereal boxes and then put them together to set a record that is officially recognized by Guinness using cereal boxes destined for a local food bank.

Besides, his charity work, Kenan is also on track to be a track and field olympian and has wrote for national columns about his training and work ethic.