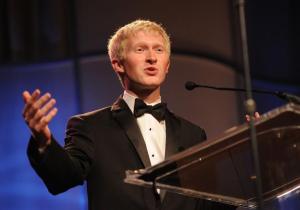 Seth Maxwell is the Founder and CEO of The Thirst Project. At 19 years old Seth dropped his dream of being an actor after a friend, who had just returned from a trip in Africa, showed him pictures of malnourished children. His friend told him all about the water crisis and how sick these children get from drinking bad water.

Seth was motivated and began The Thirst Project and in just 4 years, starting with just $75, has already provided 100,000 people with fresh, drinkable water. This passionate and dedicated young man has captured the hearts and minds of people all across America and continues on his mission of combatting the global water crisis.

More about the organization…

The Thirst Project is a growing movement aimed at building fresh water wells in communities suffering from the global water crisis. Started by college students, the Thirst Project now reaches out to colleges and high schools to educate their students on the nearly 1 billion people who still do not have access to clean drinking water and proper sanitation. In less than 3 years, its members have reached over 500,000 students and in turn raised $1.3 mil. This money has provided 50,000 people with drinkable water. In these communities, disease, child mortality, AIDS, etc. drop dramatically thanks to the clean water wells. 100% of all donations go to funding wells.

This past World Water Day, March 22nd, they signed a declaration to Swaziland, Africa (highest density of HIV positive people in the world). The Thirst Project has a goal of raising 50 million dollars in the next 10 years to provide every single person with drinkable water. They already have their first million thanks to one of their biggest supporters, Follett Higher Education Group.