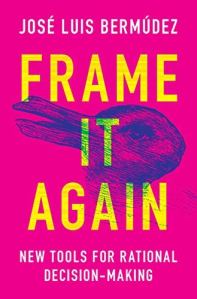 Framing effects are everywhere. An estate tax looks very different to a death tax. Gun safety seems to be one thing and gun control another. Yet, the consensus from decision theorists, finance professionals, psychologists, and economists is that frame-dependence is completely irrational. This book challenges that view. Some of the toughest decisions we face are just clashes between different frames. It is perfectly rational to value the same thing differently in two different frames, even when the decision-maker knows that these are really two sides of the same coin. Frame It Again sheds new light on the structure of moral predicaments, the nature of self-control, and the rationality of co-operation. Framing is a powerful tool for redirecting public discussions about some of the most polarizing contemporary issues, such as gun control, abortion, and climate change. Learn effective problem-solving and decision-making to get the better of difficult dilemmas

Educated at St Pauls School, London and Cambridge University, José Luis Bermúdez is Professor of Philosophy at Texas A&M University, where he has also served as Dean of Liberal Arts and Associate Provost for Strategic Planning. Before moving to Texas he was Director of the Philosophy-Neuroscience-Psychology program at Washington University in St Louis. Since his first book, The Paradox of Self-Consciousness (MIT Press 1998) he has been working on interdiscipinary aspects of self-representation and self-consciousness, most recently in Understanding “I”: Language and Thought (OUP, 2017) and The Bodily Self: Selected Essays (MIT Press, 2018). He also works on rationality and reasoning, where he has published Decision Theory and Rationality (OUP, 2009). He is currently writing a book of framing and rationality, and also preparing the third edition of his textbook Cognitive Science: An Introduction to the Science of the Mind, both for Cambridge University Press. His work has appeared in seven languages and he is one of the 100 most cited philosophers on Google scholar.