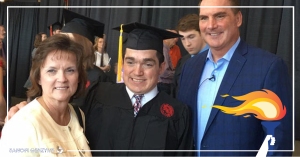 Mark Dant: A former police officer transformed by parenthood into the first national advocate for Mucopolysaccharidosis (MPS) I, a rare disease in which is son has. His son Ryan was given a life expectancy of 10-12 years and is now 31 and engaged to be married. Mark started the Ryan Foundation, which started with a local bake sale, has funded millions of dollars in rare disease research. In addition, Mark and his family successfully championed the Ryan Dant Health Care Opportunity Act, a bill designed to help those living on Medicaid assistance become gainfully employed. Mark is currently the chairman of the board for the EveryLife Foundation for Rare Diseases, a science-based advocacy organization dedicated to accelerating biotech innovations for rare disease treatments through science-driven public policy.

Each year, an award is given to those who have served as a beacon of change for an entire community – the TORCH Award (Transforming Outreach in Rare disease and Creating Hope). Through Sanofi Genzyme, the TORCH Awards, established in 2017, recognizes inspiring advocacy efforts of patients, caregivers, families, and supporters in the rare disease community. In recognition of their efforts, Sanofi Genzyme donates $5,000 to each of the above award recipient’s non-profit of choice to further support their missions. The 2020 TORCH Award winners were recently announced.

Visit https://youtu.be/yce97Vj5I5U for more information about The TORCH Awards.