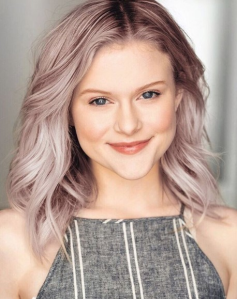 At just 16 years old, Mia Dinoto is a multi-hyphenate media mogul in the making. Her wit, spunk, and girl-next-door-realness has garnered her a massive YouTube following on her Mia Dinoto YouTube (458,000 subscribers with 60+ million views) and a blossoming acting career with her hit series “Crown Lake” airing on the wildly popular BRAT YouTube channel. Mia is always creating instantly viral content, from t umbling tutorials as a former elite gymnast (sometimes even instructing  NFL linebackers ) to relatable slice-of-life vlogs, including  driving lessons and embarrassing stories, that speak to the universal experience of adolescence. Her ongoing battles with anxiety, obsessive-compulsive disorder, and dyslexia have given her an inner strength that radiates, making Mia an unstoppable force as she becomes a Gen-Z icon.

BRAT’s “Crown Lake” tells the story of Eleanor Chambers, a new student attending Crown Lake Academy, an elite all-girls boarding school that is ostensibly her ticket to a new and better life.  That ticket has a price though, as Eleanor encounters shady cliques and a stern head mistress, and  quickly discovers that Crown Lake Academy and its population do not take kindly to new people. Mia portrays ‘Erin,’ one of the privileged bullies and a member of the most popular clique in school. ‘Erin’ is also the best friend of ‘Tiffany St. Martin,’ the campus queen bee. Please use the following link to view the trailer for the binge-worthy teen drama. Crown Lake Trailer

After training most of her life to be a professional gymnast with a clear path to Olympic greatness, Mia quit just recently for the sake of her mental and physical health and to pour all of her energy into her true passion of acting.   Mia’s videos cover a wide range of topics from the latest online trends and challenges, to fitness routines, DIY projects, personal and travel vlogs, as well as other fun and engaging videos that give viewers a peek into her daily life.

Born and raised in Maryland, Mia began training and taking gymnastic classes when she was 2 years old and began competing at the age of 8. When she was in third grade she and her family were alerted of her issues with standardized testing in school and was later diagnosed as dyslexic. As Mia continued to train and compete in the world of gymnastics, she began suffering from panic attacks and compulsive thoughts and was diagnosed with anxiety and obsessive-compulsive disorder.  Therapy and a change of elite training gyms reinvigorated her love of the sport.  Mia and her new teammates became a viral sensation as the Coral Girls and Mia began using YouTube as a creative outlet individually.  Eventually, her love for the sport waned and Mia left the gymnastics in pursuit of more creative and liberating endeavors, diving deeper into content creation and acting.  Using her gymnastics background and innate gifts as a performer, she also became a champion dancer, acrobat, and contortionist after just months of training.