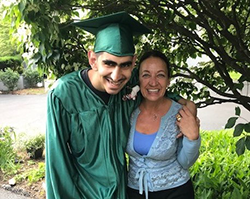 Lena and Paul Martino said enrolling their son, Cristinel, in a residential treatment program at Devereux Advanced Behavioral Health New York was one of the most difficult decisions they ever made – and one of the best.

“There are no words to describe what Devereux New York has done for Cris and our family,” said Lena, who also serves on the center’s advisory board as a way of giving back to the organization. “We are incredibly grateful to the teachers, support staff, clinicians and case managers who guided us along the way, and helped Cris become the person he is today.”

The Martinos adopted Cristinel from an orphanage in Romania when he was 3 ½ years old. When the family arrived home, they realized their son was struggling with emotional and behavioral challenges.

“Behaviors of aggression, not wanting to hug, and significant tantrums began to emerge,” Lena explained. “Paul and I thought, with more time, Cris would eventually understand how much we loved him, and that we would always be there for him.”

Cristinel was later diagnosed with fetal alcohol/drug syndrome, reactive detachment disorder and intellectual disabilities. When his behaviors escalated, the family turned to Devereux New York. Lena, who works in the field of special education, was familiar with Devereux’s philosophy of care, which focuses on providing individualized, evidence-based services and supports.

“The residential staff was compassionate and understanding of our son’s individual needs, and the educational component of his treatment plan was on target with his unique abilities,” Lena shared. “Cris now feels safe and happy, and understands that he has a family who loves him.”

Taking the next step

As the Martinos work with Devereux New York to ensure their son’s transition from the Red Hook School to a group home is as seamless as possible, they are optimistic about the future.

“Having cognitive differences makes it difficult for our son to grasp the concept of ‘next steps,’” Lena explained. “As Cris transitions to a group home, we will try to replicate what a typical day was like for him at the Red Hook School. Moving forward, we hope supported employment will be the focus of his day. We love our son and cannot wait to see him continue to grow and thrive.”