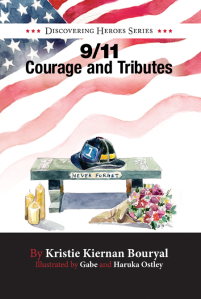 Context Productions, a media company, is releasing its latest book for kids, 9/11 Courage and Tributes. The book is the third in the Discovering Heroes™ series, which increases awareness about September 11, 2001 and everyday heroes.

“We have a whole generation of kids who are largely uninformed about 9/11, yet we are on track to lose more people to 9/11-related illnesses than we lost that day,” said CEO and Author Kristie Kiernan Bouryal.

“9/11 is a day that is still harming people – and this is going to continue for years to come. Many vowed to ‘Never Forget,’ but those words require action. I’m calling on every educator, parent, grandparent, close relative or friend of a child to use this book and others in the series to engage kids about 9/11,” said Bouryal.

Bouryal’s books are all based on true events. Her parents, John Kiernan, a former lieutenant in the Fire Department of the City of New York (FDNY), and Benita Kiernan, a former nurse, inspired the series. They are the grandparent characters in the series who lovingly inform their grandchildren about 9/11, and the fallen and everyday heroes, by responding to the kids’ many questions.

In 9/11 Courage and Tributes, the family visits special tributes created to honor and remember those we lost. The grandkids learn about the courage of everyday heroes, including their role in America’s largest water evacuation, and that 9/11 is still harming people.

In the second book in the series, Remembering Heroes, the family visits FDNY’s Rescue Company 1 in New York City to attend a memorial service for 9/11. There, the kids learn about the nearly 3,000 people lost that day, including the 343 members of the FDNY and the 11 fallen heroes from that firehouse, all while they explore the meaning of everyday heroes and see them in action. In the first book of the series, My Buddy’s a Hero – And I Didn’t Even Know It, the grandkids learn for the first time that their grandfather was part of the rescue and recovery efforts and helped rescue the last man out alive from the ruins of the World Trade Center.

This series of books is fitting for kids of all ages, especially seven through eleven. Teaching tools for the books are available at http://www.contextproductions.com, including activities that kids can complete and share with Bouryal for publishing consideration online or in print.

Context Productions is a media company that creates and publishes content for kids. Our Discovering Heroes™ series of non-fiction, chapter books reveal first-person accounts of heroism tied to September 11, 2001 and help kids uncover stories of everyday heroes in their lives.