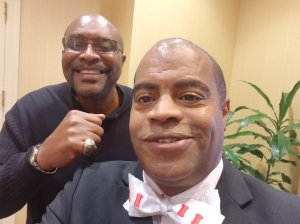 To some, Tyrone Keys may be noteworthy because of his personal accomplishments on the football field as a defensive Most Valuable Player (MVP) in high school and college, or former Super Bowl XX Chicago Bears defensive end.

Tyrone, however, remembered to give honor to whom honor is due, and graciously acknowledged his mentor’s words at Callaway High School, Coach Odell Jenkins: “Sow a thought … reap a word. Sow a word … reap an action. Sow an action … reap a destiny. Sow into a destiny … reap character”.

Tyrone is from Jackson, Mississippi, where he was named a High School All-American and voted defensive MVP of the year in the state of Mississippi in 1977. His high school team also won the state championship in 1976.

Tyrone accepted the thoughts and words of his mentor and allowed them to fuel his purpose for attending Mississippi State University. His determination to make a significant impact for this university catapulted him into making 26 career sacks (second highest in the school’s history) and being selected All-Southeastern Conference (All SEC) three consecutive seasons, 1977-1980. Tyrone also played a key role in one of Mississippi State’s biggest wins by making the game saving tackle and forcing the Alabama University quarterback to fumble on the last play. He helped to seal a 6-3 Mississippi State win over then number one ranked Alabama. Mississippi State’s win achieved a 9-2 record for the year, the best season in the school’s history. They broke Alabama’s 25 game winning streak, and Keys helped the team earn a berth to the 1980 Sun Bowl. Tyrone was elected to the Senior Bowl that year.

After graduating from Mississippi State in 1981 with a Bachelor of Science degree in Physical Education, Tyrone began his nine-year professional football career. Tyrone was the 5th Round (113th player) draft pick, defensive end, for the 1981 New York Jets. However, he decided to start his career for two seasons in the Canadian Football League with the British Columbia (BC) Lions.

In 1983, Keys returned to the National Football League (NFL) to launch a successful seven-year career. He signed with the Chicago Bears as a defensive end where he remained through the 1985 Super Bowl XX Championship year (46-10 over the New England Patriots). The Bears were 18-1 and their only loss was to the Miami Dolphins eight weeks prior to the Super Bowl, December 2, 1985. The Bears-vs.-Dolphins game had the highest number of viewers in the history of football. Keys and his team mates produced the Super Bowl Shuffle on the next day, December 3, 1985. Tyrone was the keyboardist in the Super Bowl Shuffle video which was nominated for a GRAMMY Award and sold over a million copies.

Keys founded “All Sports Community Service, Inc.” in 1993 as a non-profit mentoring and scholarship organization dedicated to helping challenged youth in Tampa, Florida, achieve their dream of attending college. Keys taught his students the idea that the skills from the playing field could be parlayed onto the field of life. Since 1993, All Sports has assisted hundreds of students obtain over $20 million in support towards their college education from all over this country and in England as well. All Sports students are mentored through a combination of academics, community service and sports. Great emphasis is placed on returning to the community to assist the next generation. All Sports is now seeing the Full Circle Participation in action with its students returning to invest time, energy and scholarship funds into the program and the community.