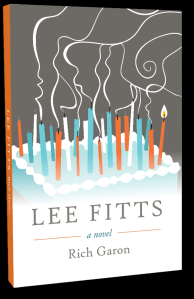 You can’t stop rooting for Lee Fitts. They say he had such potential. Then after that morning, he became mostly a survivor, traumatized by a horror that took so many innocent lives. As he tries to live on, his limitations make him what forgiveness, compassion and honesty are all about. But he soon learns, he is a in a world where one so clearly guided by these traits is easy prey. A woman sharing an important link to that morning commits herself to Lee’s recovery.

A night at a homeless shelter gives Lee the ability to forgive the villain who has haunted him all these years. And a pastor, wrestling with problems of his own, affords Lee the chance at redemption for himself and his father.

Rich Garon works with the homeless in Northern Virginia. His career on Capitol Hill spanned more than twenty-five years, the last six of which he served as chief-of staff of the House Committee on International Relations. He and his wife, Karen, have two children, and five grandchildren. Proceeds from his first novel, FELLING BIG TREES (2017), went to WhyHunger. Those from LEE FITTS will go toward supporting a homeless shelter in Woodbridge, Virginia.

This entry was posted in Uncategorized. Bookmark the permalink.