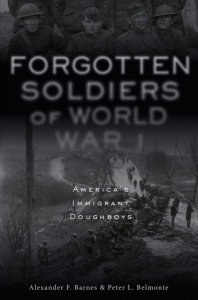 This book covers the entire spectrum of military service during World War I. It gives examples, including many photographs, from almost every ethnic and national group in the United States during this time. Including draft registration, induction and training, stateside service, overseas service, combat, return home, and discharge, learn the history of America’s foreign-born soldiers during World War I and how they adapted to military service to become part of the successful American Expeditionary Forces.

Alexander F. Barnes served in the Marine Corps and Army National Guard, retiring as a Chief Warrant Officer. He retired as a Department of the Army Civilian in 2015 and is currently the Virginia National Guard Command Historian. He holds a master’s degree in anthropology and has authored: In a Strange Land; The American Occupation of Germany 1918-1923 (2010), Let’s Go! The History of the 29th Division 1917-2001 (2014), To Hell with the Kaiser, America prepares for War (2015), and Desert Uniforms, Patches, and Insignia of the US Armed Forces (2016).

Peter L. Belmonte is a retired U.S. Air Force officer and freelance historian. A veteran of Operation Desert Storm, he holds a master’s degree in history from California State University, Stanislaus. He has published articles, book chapters, reviews, and papers about immigration and military history and has been a college adjunct instructor of history. Pete has written two books: Italian Americans in World War II (2001) and Days of Perfect Hell: The U.S. 26th Infantry Regiment in the Meuse-Argonne Offensive, October-November, 1918 (Schiffer Publishing, 2015).