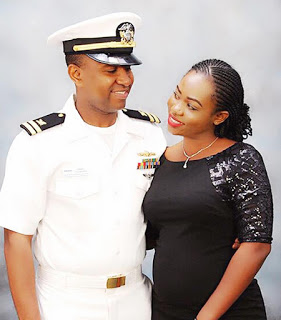 Lt. Ismael Tounkara, a Metropolitan State University in Minneapolis, Minnesota, graduate and Republic of Guinea, Africa, native is a Navy Acquisition Contracting Officer (NACO) intern and contracting officer for the Common Electronics Integrated Weapon Systems Team with NAVSUP WSS, was awarded the Navy-Marine Corps Commendation Medal for his service to NAVSUP WSS from February 2016 to present. Tounkara came from humble beginnings, however.

Originally a native of the Republic of Guinea, he fled west toward the United States in 2004 during a period of great turmoil under a 24-year military dictatorship and violent ethnic clashes. He was homeless, living on the mean streets of New York City and peddling CDs just to survive. Tounkara was not scared, however, and he did not waver.

Tounkara considered himself a troubled youth without much direction, and being surrounded by violence, ethnic strife and economic and political instability in Guinea, he knew he needed to make a drastic change from that life and what would follow.
“Leaving Guinea was both difficult and exciting,” he explained. “It was difficult in the sense that I did not know if I would be able to go back and see my family and friends again. I was very involved in politics during my two years of college in Guinea. Being born poor, I knew education and politics were my only segue into a better life and leaving those two passions behind tore me apart. It was exciting, because I had always read about the opportunities in the U.S., especially the opportunity to be who you want to be based on merits and hard work.”

His mother reminds him almost daily of the sacrifice he made to give their family a better life.

Tounkara recalled her words, “How would our lives have been had you not fled to the U.S.? God knows best, but I certainly think we would still be living in extreme poverty, eating only one meal a day.”

Tounkara, who came to America with a dream but barely spoke a word of English, is an example of courage, determination and ambition.

After his arrival to the United States in 2004, Tounkara was awarded a one-semester grant to attend the Intensive English Language Center at Wichita State, where he learned English. With no money to pay for college and no access to federal or private student loan programs, Tounkara came back to New York City where he lived in the shadows as an illegal alien. He continued to informally study English until he was referred to the New York Human Rights First organization that eventually referred him to The Advocates for Human Rights – another nonprofit organization that assists low-income asylum seekers, in Minneapolis – a city he would eventually claim as home. Tounkara credits The Advocate organization for fighting on his behalf to apply for political asylum, to legally stay in the States and eventually become an American citizen.

While staying at a Minneapolis homeless shelter while his immigration case was pending, he would walk for several miles each day to the nearest library, collecting all of the English grammar and books on word enunciation he could find, trying to learn and master English.

“I used to be the first one in the library when the doors opened and the last one to be kicked out when the library closed,” said the eight-year Navy veteran. “Learning the alphabet and the English language at the age of 22 was very difficult. I doubt I could ever master the English language, especially English spoken in Harlem and the Bronx; it sounded so fast and so well cadenced that I thought it was like music.”

Back then, studying and learning English was hard,” he continued, “but in order to go to college and make a better life for me, it was the only way.”

He continued to study hard and his efforts paid off – he passed the Metropolitan State University (Minneapolis) college entrance exam and was accepted into the university. Three years later, in 2009, he earned his Bachelor of Science degree in Finance. A feat not many can claim, Tounkara came to the U.S., with English being a foreign language, and in five years achieved a college degree. Tounkara’s train of success does not end there – for him, it’s “full steam ahead.”

After college graduation, he joined the United States Navy in 2010 and at his first duty station in Norfolk, Va., Tounkara became an American citizen, passing his naturalization test to join what he calls, “the lucky ones.” Tounkara credits the Advocates for Human Rights, the pro bono law school students, and professors of the University of Minnesota for giving him hope and the strength of resolve.

In Norfolk, Tounkara was stationed aboard the aircraft carrier USS Dwight D. Eisenhower (CVN-69) and deployed for Operations ENDURING FREEDOM and INHERENT RESOLVE during the U.S. military’s intervention against the Islamic State of Iraq and Syria. Tounkara spent a mere two years as an enlisted Sailor, quickly achieving the rank of petty officer second class, and again his strength and determination paid off. In 2012, Tounkara was accepted to the Navy Officer Candidates School. Raising his hand proudly as an American, Tounkara took the Oath of Office to join the United States Navy officer corps, and later a member of the Navy Supply Corps.

Tounkara’s journey as a Supply Corps Officer led him to see and experience new adventures, such as a two-year assignment and deployment aboard the multi-purpose amphibious assault ship USS KEARSARGE (LHD-3) as the Disbursing, Sales and Wardroom Officer. While supporting the campaign against ISIS, Tounkara also visited Israel, Jordan, Spain and Cyprus. Later, he served as the Coalition Logistics Officer (CLO) with U.S. Naval Forces Central Command, Manama, Bahrain from January 2015 to January 2016 and completed a 75-day individual augmentee assignment with the Office of Military Cooperation at the U.S. Embassy in Kuwait before arriving to NAVSUP WSS Mechanicsburg.

For his service with NAVSUP WSS in Mechanicsburg, Tounkara was awarded the Navy-Marine Corps Commendation Medal – his medal citation emphasized his expert administration, management and professionalism as the key to executing more than 112 contract actions valued at more than $2.4 million, among other achievements.

“At my award ceremony, I thanked the command and the admiral for giving me the opportunity – including being able to run five miles before I come to work every day,” said Tounkara, who recently received orders to U.S. Africa Command for his FAO program duties in February. “I have been incredibly lucky beyond words in this country, and I am a firm believer in the phrase, ‘I am entitled to nothing, and grateful for everything.'”

For those who know Tounkara, he is the quintessential example of how hard work, dedication, ambition, and effort can pay big dividends and change your life.

Tounkara’s mother, sisters, brothers, and in-laws still live in Conakry, Guinea today, and Tounkara credits much of his resilience and hard work to his parents.

He recalled his father, who passed away at the age of 55 in 2006, reminding him about education and the pursuit of a better life. He credits his mother for his will to succeed – it was her energy, resilience, tireless work ethic and “never give up, no matter how tough life gets” attitude that drove him to succeed. Tounkara, after establishing his first savings in the Navy, used the money to buy his mother a duplex and a new car.

“She displays my enlistment and commissioning pictures in her living room and keeps a four-by-six photo of me under her pillow,” said Tounkara proudly. “She is immensely grateful for the opportunity afforded to me and gets very emotional whenever talking about it. And I am very thankful and proud of her.”

To be thankful is to recognize and be grateful – to look at things with great concern and care – to embrace things much larger than yourself,” he added. “We all have the ability to succeed in life, to do the right thing and to make choices to make our world a better place.”

A field activity of the Naval Supply Systems Command, NAVSUP WSS is the U.S. Navy’s supply chain manager providing worldwide support to the aviation, surface ship, and submarine communities. NAVSUP WSS provides Navy, Marine Corps, joint and allied forces with products and services that deliver combat capability through logistics. There are more than 2,000 civilian and military personnel employed at its two Pennsylvania sites, and one site in Norfolk, Virginia.