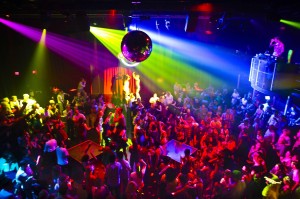 While Jewish Gen-Xers and Baby Boomers are settling in for a night of Chinese takeout and movies this Christmas Eve, the Jewish urban 18-34 crowd will be dancing and flirting the night away at the 31st annual MatzoBall – multi-city lavish parties at top nightclub venues, where young Jewish singles party till dawn with the hope of finding the one.

It all began when founder, Andy Rudnick, organized his first Christmas Eve bash at a Boston University-area bar in 1986 for Jewish college students looking for something to do on Christmas Eve (and meeting his own wife in the process). It’s become a Jewish rite-of-passage, filled with stories about some lucky partygoers actually finding their bashert,
getting married and “making their own little matzoballs” as Rudnick puts it.

For many families, it’s become a multi-generational tradition. Parents met at a MatzoBall party in decades past, and in recent years their children are attending in hopes of lightning striking a second time.

According to Jewish synagogue franchise, Chabad.org, “many people are discovering the wisdom of serious dating and focusing on compatibility. A good place to start is in the hub of your local Jewish community.” Nationwide  MatzoBall parties are that very hub,
where young Jewish singles congregate in a fun, social, party atmosphere and meet other Jewish singles, to expand their social and romantic prospects, sans Internet and dating apps.