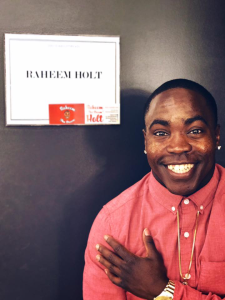 By Deborah A. Culp

A native of Pulaski, TN, Raheem “Tha Dream” Holt later relocated to Nashville, TN and began the next phase of his talented life. His first entertainment industry break came from Mr. C.J Bryant, the owner of “Keep It Going Productions. ”

His initial official hosting event was on October 3, 2015.  The same night he accepted his first radio offer. Things moved smoothly along for the  handsome, Entertainment giant Kevin Hart look alike.  Jeremiah Marshall, the owner of “Wee Battle” saw Raheem fall off a Hoover board and thought that it was funny.  Being a light hearted professional, Raheem laughed too, but went on to earn other deserving credits, minus accidents and took the business of a comedy career seriously.

In 2016 he started working with the owner of “Five Out Films” Wesley Crutcher.  “Tha Dream” stated that Crutcher was the first Director that he had worked with and one who believed highly in him.  Mr. Crutcher helped me to believe in myself even more and helped him to see that dreams do come true.” The two men began and still have a powerful friendship both in and outside of the entertainment industry.

Later in 2016 he accepted an offer to become a member of the J-Spence Dance Co. from the owner James Lester. –Spence was formally known as J-Spence. That opportunity helped “Tha Dream” to expand his horizons and to learn even more about the business from various sides. It was yet another win-win situation which allowed him to showcase his talent as both, a dancer and a comedian.

Moving ahead in 2016, more channels were opened form Raheem’s hard work and driven talent. It was also the year, in which he met Breion Dixon, known as Lil Bre. He was introduced Raheem by  MBaye Seck, another Director. So far to date, Mbaye still remains the youngest and best Director In Nashville, TN. “Tha Dream”  and  Mbaye Seck decided to do videos together and that relationship was  proverbially lit (like a candle) and took off. 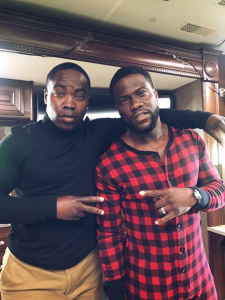 In 2017, Raheem’s dreams became even more alive, partially from serious collaborations and networking networking. Some of those liaisons included many of  and collaborating with Music City USA and other areas of the country’s largest industry names.

August 2, 2017 is a day that has been well documented for Raheem “Tha Dream” Holt after he received yet another well earned break.  That came in the form of a phone call from a Mr. Omar Thompson Visionary/Founder of “One Nine Media and Marketing Co.” It wasn’t exactly a cold call, because the two gentlemen had met previously in 2016.

Once he learned about Raheem “Tha Dream” Holt, Omar decided that he wanted to represent Raheem because he saw something special in him.

The company flew Raheem “Tha Dream” to Dallas, Texas to sign the official Management, Entertainment contract.  It would be putting it mildly to say that  “things positively exploded on the horizon for the sizzling hot Millennial!”

Even though he is told many times that he is an outstanding, talented, humorous personality and that he has a strong resemblance to celebrity Comedian/Actor Kevin Hart; he remains thankfully humble. The accomplishments are so many to mention and each one of them are important. Since becoming a #MusicCityUSA resident, “Tha Dream” has accomplished a lot great things independently and with others.

His noted skit titled “I Got Robbed” went viral shortly after hitting 4.5 million views across multiple platforms. He’s also made appearances on commercials and television shows aired on ABC, NBC, FOX, and many others. Raheem “Tha Dream” has been featured live on the Dudley and Bob radio show in Austin, Texas to impersonate Kevin Hart for a prank call.

While being the Executive Producer/Host of his own radio show: 1470AM – Nashville “Wee Battle” he has interviewed a myriad of talent and community leaders. When the show runs on air, it is a live show. Chocked full with of amazing interviews of local artist and businesses in and around the Mid-State. Raheem “Tha Dream” Holt is very active and recognized outside of the entertainment industry; leading by example and making a variable difference whenever possible.

He is also a part of a remarkable organization named: “Above Average.”

It’s an organization of young men and women who gratefully give back to the community and spread messages of hope and promise. Their core message is: “Anything is possible in life and to always strive to be above average

The hard working, multi-faceted young man holds down traditional jobs to support his immediate and future dreams.  He works for the Nashville based, Omni Hotel and Thompson Hotels. Raheem “Tha Dream” Holt was nominated as the spectacular, “2017 Young Leader of the Year Award” by the Greater Nashville Hospitality Association Stars of the Industry Awards committee.

He was also named the “Music City Hitmaker” (in June, 2017) and one of the youngest candidates to be awarded.  The Music City Hitmaker Award is an award which is given to individuals that make an impact in Nashville/MusicCityUSA. And to those who are recognized outstanding customer service in the “It City.”

A question posed to Raheem “Tha Dream” at interview time, asking who are some of your favorites and influences? He candidly answered “ my favorite comedians are: Kevin Hart, Steve Harvey, Chris Rock, Dave Chapelle, and Richard Pryor. I also look up to other while looking up influencers and motivational speakers such as; Grant Cardone, Eric Thomas,  Gary Vaynerchuk and Les Miles.

At the blessed age of 25 Raheem “Tha Dream” Holt is a young comedy icon with a bright future ahead of him and definitely one to watch out for. “Stay tuned many new and exciting things are in the making.