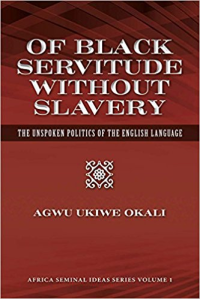 About The Book: The importance and influence of the English language in modern life cannot be gainsaid. Not only is there a large and growing number of people who communicate in it – about one quarter of the world’s population by some estimates – but it is by far the world’s favorite second language, that is, the language more people are likely to speak than any other in addition to their own native tongues. Indeed, one of the enduring realities of modern life is the dominance of English as the language of communication across cultures. As goes Anglophone culture, so goes the world. With the acquisition of English, one also acquires not just the words and expressions, but, most critically, the system of thought and mindset associated with the language. Therein lies the crux of the matter: the unfortunate implications of this global dominance of the English language for the black race, and which implications form the subject of this book. Everyone knows that in English bad things are “black” and “black” things are not good (e.g. black spot, black day and blackmail). By the same token, good things are “white” and “white” things are not bad (white knight, white magic, white lie). The unfortunate, and dangerous, thing is that this categorization is not only widespread throughout the language, but is systemic and systematically applied. This “blackness of bad/badness of black” concept, together with its accompanying mindset, and the consequences which flow from it for both black and white people, and for humanity at large, is the focus of this book. Of Black Servitude Without Slavery: The Unspoken Politics of The English Language avers that this “blackness of bad/badness of black” mindset, unavoidably imported into the realm of race relations, creates a situation in which black people effectively are held in perpetual psychological servitude, and the white person, independent of himself or herself, is imbued from childhood with a mindset of negativity towards “black” things, thus, wittingly or otherwise, negating the notion of equality of the races, which mindset he or she actually has to work hard to overcome. In substantiation of this averment, the author undertakes an exposition of the role and impact of the “blackness of bad” mindset in the daily lives of both black and white people, and ultimately of society-at-large. Among the contexts in which the subject is analyzed are those of race relations, the black image and black self-esteem, Western aesthetics, including the idea of beauty, constitutional law,and the administration and enforcement of criminal justice. The author, after thus exploring the broad ramifications for society of this essentially systemic defamation of the black race embodied in the “blackness of bad/badness of black, etc.” terminology, with accompanying mindset, goes on to proffer a unique and effective solution, together with an implementing campaign, to remedy this situation as an urgent imperative of our time. Of Black Servitude Without Slavery: The Unspoken Politics of The English Language is a book of wide-ranging coverage that would engage anyone involved or interested in issues of philosophy, politics, linguistics, human rights, race relations, law, social justice and equity, and, for that matter, social

About The Author: Dr. Agwu Ukiwe Okali is the Founder-Chairman of The Okali Seminal Ideas Foundation for Africa (OSIFA), a non-profit Foundation dedicated to fostering and facilitating a more effective participation of Africa in the world of ideas, with the aim thereby to end the continent’s state of “ideas-dependency.” Born in Nigeria, where he attended the country’s elite King’s College, Lagos, Dr. Okali holds a Bachelor of Laws degree from the London School of Economics and Political Science, as well as Master of Laws and Doctor of Juridical Science degrees from Harvard Law School, where his doctoral thesis was supervised by the renowned jurist, Professor Lon L. Fuller.

After a stint as a corporate lawyer in the U.S. private sector, Dr. Okali had a distinguished career at the United Nations, last serving as Registrar of the United Nations International Criminal Tribunal for Rwanda, with the rank of United Nations Assistant Secretary General. Among his achievements in service at the UN include pioneering a restitutive/restorative justice idea that mandates integrating assistance to victims into the conventional “retributive” approach of punishing the culprit in the administration of international criminal justice, which influenced key aspects of the set-up of the permanent International Criminal Court in 1998. Another of his noteworthy contributions was authoring a key strategy paper that assisted African leaders in the successful campaign to elect the first African UN Secretary-General in 1991, and ushered in the idea of “equitable rotation” of the post, influencing selection of the UN Secretary-General ever since. Dr. Okali, a long-standing member of the Connecticut (USA) State Bar, is married and has two children.