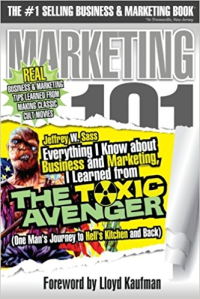 An established and successful chief marketing officer and entrepreneur, once upon a time Jeff Sass spent seven years making low-budget action/horror films for legendary independent movie studio Troma, home of THE TOXIC AVENGER. It turns out there are a lot of similarities between filmmaking and starting companies, and the lessons Jeff learned making B-movies have served him well in the C-Suite. “Everything I Know about Business and Marketing, I Learned from The Toxic Avenger (One Man’s Journey to Hell’s Kitchen and Back)” is full of practical business and marketing insight and inspiration drawn from the often comical trials and tribulations of creating cult-classic independent films. Sass shares lessons learned from his experiences ranging from RABID GRANNIES to READING RAINBOW (yes, at one time Troma actually represented licensing rights to the Emmy Award–Winning PBS TV series!), and he cleverly turns his tales of moviemaking mayhem into useful nuggets of business and marketing wisdom applicable to any industry, including yours.

While early in his career Jeff Sass was making B-movies, he has spent more recent years in the C-suite as a COO, CEO, and CMO (currently CMO of .CLUB Domains). With a career spanning the entertainment, computer-game, mobile, and Internet worlds, he has written and produced for film and TV, and he has been a tech start-up entrepreneur. A graduate of Cornell University, Jeff Sass is a frequent speaker on entrepreneurship, mobile marketing, domain names, and social media, and has had articles appear in FORBES, ENTREPRENEUR, AdAge, and many other publications. As the father of three, he has also been a prolific “dad blogger,” participating in influencer campaigns for brands including Intel, Sony, Ford, LG, Asus, and others. Despite this seemingly successful career, Jeff Sass is happy to admit that everything he knows about business and marketing, he learned from The Toxic Avenger.

I have appeared on literally dozens of Podcasts across many topics, from Domain Name Wire to Domain Sherpa, to Chris Brogan’s Owner Media podcast, to a co-host of Cast Of Dads, as an established Dad Blogger. I’ve also appeared on numerous TV appearances throughout my career including Entertainment Tonight, USA Network’s UP ALL NIGHT and more.