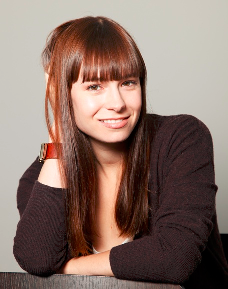 CURRENTLY
I am a bot-obsessed product manager in San Francisco. I work for Growbot, helping to make sure employees get the recognition they deserve on their teams! I also help to admin Botwiki.org and Botmakers.org, a huge community of bot creators and enthusiasts, and manage their newsletter Bot! Zine.

PREVIOUSLY AND/OR SIDE PROJECTS
TV + ONLINE VIDEO HOST AND PRODUCER
Since 2006, I’ve been hosting content for the web and TV. This includes everything from video podcasts to red carpet premieres. I’ve also been a guest on many programs as a tech, science, and futurism commentator. You may have seen me on the Doctor Who 50th Anniversary Pre-Show, the Game of Thrones Season 5 Premiere, and Gizmodo: The Gadget Testers. I’ve also worked for Discovery Digital, Sony Playstation, and CNET Networks. More recently I was the host of Dear Veronica for Engadget, and (as always) Sword & Laser!

STARTUP ADVISOR
Throughout the years I’ve worked with many startups to help test their products, figure out their social media strategies, and evangelize. My main areas of interest include wearables, activity tracking, gaming and literature. Companies I’ve worked with include Storium, Goodreads, Forge, Trippy and Chic CEO. I also sit on the Board of Directors for about.me.

EVENT EMCEE AND SPEAKER
I’ve worked with clients such as IBM, Intel, Disney, OnStar, Sony and many more as an event emcee, hosting events ranging from intimate fireside chats to keynote presentations with audiences of over 20,000 attendees. I also regularly attend conferences to speak about genre fiction, consumer electronics, social media, science communication, and feminism in geek culture.

VOICE ACTOR
For some wonderful reason, people keep asking me to do voice over work! I love it. I’ve done some commercial work, but I especially love doing character voices for video games and web cartoons. You can hear me in the Fallout: New Vegas DLC Old World Blues, the animated series SuperF***ers and Flagon, and in the audio drama We’re Still Alive.

WRITER
Aside from script writing, I’ve written for many notable websites and magazines including Maximum PC, PC Gamer, Playstation: The Official Magazine, Slate, and Delish. In the world of fiction, my first science fiction short story, CATASSASSINS!, was published in 2014 in the Help Fund My Robot Army! Anthology.