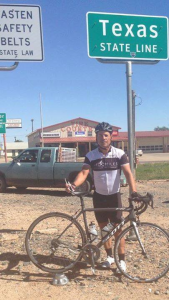 Founder, Davis Tucker began the 1400 Miles journey in September of 2013 motivated by his Brewmaster at NxNW Restaurant and Brewery and longtime friend, Don Thompson’s inspirational recovery from prostate cancer. In 2013, Davis wanted raise awareness about prostate health after he realized how little men speak about prostate health, and how crucial being able to discuss it with a doctor and family member can be to prolong a life. So, Davis used his two passions, bikes and beers, to begin to break down the social barrier, and spark a conversation about prostate health.

So, on Tuesday, September 24, 2013, Davis got on his road bike, and began the two week, 1,400 mile trek from Austin, Texas to Denver, Colorado in time for the Great American Beer Festival. Two weeks later, many climbs, tears, fears, scrapes and sore muscles, Davis rolled into Denver just in time to talk beers with 50,000 people!

One year later (2014), the organization grew to include the Austin Community Ride (one day ride with multiple distance options and same start/end location), and The Big Ride grew from 1 to 7 (3 rode the entire ride, and 4 joined for a stage).

In 2015, the organization continued to grow, adding a second Community Ride, Youngsville Community Ride, and The Big Ride grew into 14 (8 cyclists rode the entire ride and 7 joined on for a stage).

The journey has been tough, we have learned a lot, grown significantly, and are continuing to get inspired!