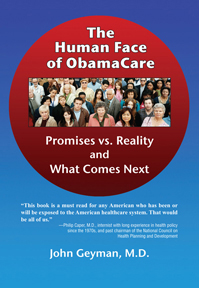 Latest polls show that the majority of Americans do not approve of our current health care system. Rising rates, decreased quality for some, and less choice are all reasons that the public has voiced opposition to the current plan. If you’re reading this, chances are you have been personally affected by the health care system in some way and are interested and invested in its improvement. But with such a complicated and often politically muddled topic, where does the average American turn for a straightforward explanation rooted in research and actual experience?

Enter: The Human Face of ObamaCare: Promises vs. Reality and What Comes Next by respected and experienced physician, medical editor, and health writer John P. Geyman, M.D.

Dr. Geyman delivers an evidence-based, objective, non-partisan, and well documented read for those interested in where our health care system is going and what it means for them – and, especially during this election season, that should be all of us!

The Human Face of ObamaCare truly does show the human face of the Affordable Care Act (ACA or ObamaCare) as more than 50 stories of real patients and their families best illustrate the continuing problems of the health care system. The ACA has helped many millions of people since its enactment in 2010, but has fallen far short of what is needed to improve access, affordability, and quality of U. S. health care. Much of our population still cannot afford health care, and there is no cost containment in sight. Underinsurance is the new norm, with narrowed networks, high deductibles, and increasing cost sharing forcing many people to forego necessary care.

So, what’s next? Dr. Geyman takes a look at the ACA almost six years after its passage. He takes an evidence-based approach to assessing three major alternatives for further health care reform: (1) continuation of the ACA with improvements as needed, (2) Republican proposals for its repeal and/or replacement, and (3) single-payer national health insurance (NHI).

“There is growing awareness that many of us can no longer afford health insurance or care, and that we are one accident or serious injury away from personal and financial disaster,” says Dr. Geyman. “I hope to increase public knowledge about these issues, debunk myths perpetuated by opponents of reform, and build support for positive and vital change.”

Fascinating and immensely helpful, The Human Face of ObamaCare reveals:

· Why the current market-based system is unsustainable for patients, families, employers, taxpayers, and the government
· How the ACA has failed to control costs of health insurance or health care
· Why fundamental financing reform is necessary to control costs and how this can happen
· An examination of the current election cycle and the three leading alternatives for health care being proposed
· A compelling economic, sociopolitical and moral case for single-payer national health insurance · And much more!

John Geyman, M.D. is Professor Emeritus of Family Medicine at the University of Washington School of Medicine in Seattle, where he served as Chairman of the Department of Family Medicine from 1976 to 1990. As a family physician with over 25 years in academic medicine, he has also practiced in rural communities for 13 years. He was the founding editor of The Journal of Family Practice (1973 to 1990) and the editor of The Journal of the American Board of Family Medicine from 1990 to 2003. Dr. Geyman served as president of Physicians for a National Health Program from 2005 to 2007 and is a member of the Institute of Medicine, now the National Academy of Medicine.