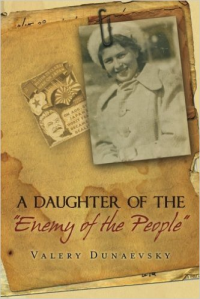 Since 2005, the United Nations has designated Jan. 27 as International Holocaust Remembrance Day. The day pays tribute to the six million Jews and five million non-Jews who were killed in the genocidal actions during World War II.

In his new book, “A Daughter of the ‘Enemy of the People,’” Valery Dunaevsky not only wants to highlight the destruction caused by the Holocaust, but also the abuse of power in the Soviet Union before, during and after World War II. During Stalin’s reign, especially before the war, millions of innocent Russians were arrested, shot or sent to the Gulag after being labeled “enemies of the people”. Dunaevsky’s grandfather was labeled as an “enemy of the people” and died at one of these camps. His parents also narrowly escaped the Holocaust.

“With the passing away of the perpetrators and victims of the crimes of the Stalin era and of the Nazi Holocaust, the world is losing the witnesses of these crimes,” Dunaevsky said.

Dunaevsky’s memoir, which he devoted to his late mother, intertwines his family history with the violence against the Jewish population in parts of the Soviet Union and other countries occupied by Nazis during World War II. He also details his struggle of immigration to the United States from Latvia.

In addition, his book offers a unique perspective of the political climate of the Soviet Union during Stalin’s regime. By sharing his story, he not only wants to pay tribute to his family, but also inform others about the evils of communism resulting in the suffering of innocent people, including Jews.

“By showcasing Stalin’s repressions, the book demonstrates the extremes of the socialist system under Stalin, who employed criminal abuses against the population,” Dunaevsky said.

Valery Dunaevsky, Ph.D., is an engineering consultant and writer with VVD Engineering LLC. He received a Master of Science and a doctorate in mechanical engineering from Riga Technical University. Dunaevsky is a member of the American Society of Mechanical Engineers as well as the Society of Automotive Engineers International. He resides in Monroeville, Pa., with his wife.