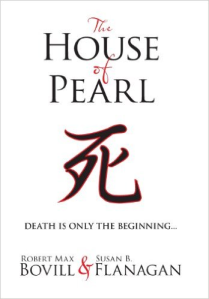 Pop star Elia Pearl is a respected singer and songwriter with four songs on the Billboard Top Ten. With sold-out concerts everywhere and millions in the bank, Elia should be on top of the world. Unfortunately, all she can think about is her loneliness. But all of that is about to change when Elia is invited to return to a house she has spent the last twenty years of her life running away from. Elia arrives at the House of Pearl, a Victorian home built on the Sausalito, California, waterfront. She hopes to write some new music or at least take a break from her busy career-and soon encounters a dashing yacht captain named Paul Hamilton. As she comes to terms with a family history haunted by ghosts and betrayals, she and Paul begin a passionate affair, fueled by both the devilish spirits that roam the house and Elia’s desperate need for love. The tragic tale of the house slowly unfolds, and Elia recounts a story of love and unfaithfulness to Paul that only fuels the spirits’ plans to threaten her newfound happiness. In this romantic paranormal thriller, two lovers must survive a ghostly onslaught or else find themselves doomed to become part of the tragic history that lurks in the shadows of The House of Pearl.

Robert Bovill is a true Renaissance Man from the San Francisco Bay Area. As a Writer, Art Director, Producer, Designer, Scientist, and Adventurer, he mixes his passion for science, design and writing into a career and lifestyle that has earned him numerous awards and praise over the years.

As a testimonial to his achievements and success, Robert Bovill has been the recipient of a Gold Broadcast Designers Association Award, and an Emmy Award for Outstanding Individual Achievement in Set Design. Robert’s television career has spanned several decades; he has been a longtime Member of the Art Directors Guild, with over thirty years of experience as a professional Art Director in television and film. His first novel,

“The House of Pearl” was inspired by Robert’s ownership and renovation of a 120-year old Sausalito waterfront Victorian where his story unfolds. The stories he heard about the house combined with his love of the proud old house; originally built by a sea captain on the waterfront in Sausalito over a century ago, combined with reading about previous tenants and some research at the Sausalito Historical Museum, was the inspiration for the novel as well as his screenplay based on the same story.

At this time, Robert is a partner in 5 Pictures Entertainment, which develops television, film and real estate projects. Robert currently lives in San Francisco with his family. For more information about Robert go to bovillcreative .com.Susan is an Emmy Award® Winning Writer and has won numerous Telly and Aurora Awards for her innovative work as a film and television producer. She is a prolific writer with success in many genres. Her love of storytelling began as a child with a close-knit family that travelled extensively while her father was stationed in the U.S. Air Force. Ultimately settling in Orange County, California, her experiences have become the subject for her novels, films, and television series.Susan has written numerous feature film scripts, scripted dramas, and unscripted series for television.