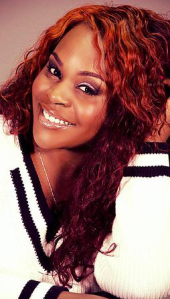 “Old things have passed away and behold all things have become new” (2 Corinth. 5:17) is the scripture that has left an indelible mark in Evangelist Danielle’s transformation through Jesus Christ. Evangelist Danielle Williams is the visionary of “A New You Ministries” which purpose is to restore, regroup and refocus the youth and women in society to overcome the destruction of the streets, human sex trafficking and domestic abuse. A focus on drug abusers, prostitutes and many who’ve suffered abuse of all kinds.

With an unwavering commitment to the Lord Jesus Christ, the love for God’s people, Evangelist Danielle has given her life to instruct, equip and edify the youth to lead a victorious life. She is a woman in pursuit of the Kingdom of God.

Her track record as a no nonsense, leaving nothing untried for accomplishing purpose has established her as one the most sincere and respected sougt-after ministers of today. Hearing and heeding to the voice of God, she continues to be placed in high demand, a variety of ministerial and professional platform. She has been blessed to tell her “life changing” testimony at conferences, high schools, universities, local churches etc. both nationally and internationally.

Evangelist Danielle Williams is the founder and CEO of the cutting edge, no nonsense, international ministry, “A New You Ministries,” designed to snatch the world’s youth out of the jaws of hell. However, before she became an anointed Woman of God, she endured many horrific events during her lifetime. Danielle’s anointed testimony is astounding!

Evangelist Danielle Williams has appeared on multiple television programs worldwide, including Maury Povich, The 700 club, and many more. She is based in Los Angeles, California, but her ministry is worldwide. She has appeared on speaking tours throughout the United States and the Caribbean, with no end to her popular story.