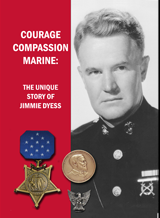 In America the two highest awards for heroism are the Medal of Honor and the Carnegie Medal (heroism by a civilian). In order to earn these awards, one must perform an act of extraordinary heroism that is witnessed, documented and fully validated.

For risking his life to save a drowning woman, 19-year-old Jimmie Dyess received his first medal of heroism, the Carnegie Medal. Years later, after becoming Marine Lieutenant Colonel Dyess, he earned the Medal of Honor for saving four wounded Marines behind enemy lines and for exemplary valor and leadership. Dyess received this medal posthumously.

Dyess is the only person to have received America’s two highest awards of heroism. His unique story of courage and compassion inspired Perry Smith, a best selling author and husband of Dyess’ daughter, to write Dyess’ biography.

In “Courage, Compassion, Marine,” Smith highlights Dyess’ accomplishments of being an Eagle Scout and all American marksman as well as his dedication to serving his community and country. Smith also takes readers through the history of the Marine Corps, the Medal of Honor, and the Carnegie Medal. He also highlights important figures such as General George Marshall, Admiral Chester Nimitz and Andrew Carnegie.

“When I think about the Carnegie Medal and the Medal of Honor, I find the similarities outweigh the differences,” Smith said. “This nation is well served by these two awards and the stringent criteria which has made them so special.”

Major General Perry M. Smith has served 30 years in the U.S. Air Force where he commanded an F-15 fighter wing, served as the Air Force’s top planner and was commandant of the National War College. He holds a doctorate in international relations from Columbia University and has been seen on CNN, CBS-TV and radio, and NBC News as a military analyst. This is Smith’s seventh book, with “Rules and Tools for Leaders” landing a top spot on Amazon.com’s bestseller list. Smith and his wife reside in Augusta, Georgia and have two children and three grandchildren.