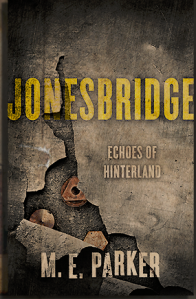 Our obsession with the apocalypse and dystopian societies has long-influenced popular culture. The Hunger Games: Mockingjay set box office records for 2014, the reboot of post-apocalyptic classic Mad Max was met with rave reviews and the Young Adult section of every book store is peppered with interpretations of life after the world ends. Environmentalist and award-winning writer M.E. Parker questions and explores society’s obsession with its own downfall in the below Op Ed.

His new book, Jonesbridge: Echoes of Hinterland, takes a new approach, centering around a post-digital era and how society would function if it could no longer access its online history. Our obsession with social media compels us to share our selfies, our locations and our life stories through the web,  but what would happen without all that knowledge at our fingertips and no way to access it again? Jonesbridge answers that question for us and more, exploring the environmental costs of human influence and our need to evolve to adapt to those consequences.

“I Survived the Apocalypse, and All I Got Was This Lousy T-shirt.”

Our screens stare back at us as we divulge our family secrets, what we’ve eaten and where, what the weather has done to our plans, how proud we are of our children, how angry our parents make us, how the headlines have ruined our otherwise fantastic day. We reveal our opinions on politics, religion, race, gender, and our conviction in, or our denial of, climate change, sharing day and night with people that, if they exist, we may or may not know, like, or understand. We do this between taking selfies and filming the police, while dining or going to the bathroom, while under the spell of our hand held electronic devices that link us to the breadth of human knowledge and the depth of human conceit—all beneath the omnipresent eye of advertisers and no fewer than fifteen Big Brothers tracking our digital movements, cataloging our preferences, searching our dissent, compiling mindprints of us all, willing participants. Why then would we create new dystopian worlds when our own reads like an Orwellian sequel?

In a society where the news cycle delivers daily tidings of mass shootings, city-leveling earthquakes, terrorism, environmental disasters, and genocide, in our entertainment, many of us still hunger for tales of post-apocalyptic misery and dystopian worlds. Confronted with the question of why, as someone who both writes and reads dystopian novels, the answer does not come to me as easily as I imagine it should.

I first picked up a copy of Nineteen Eighty-Four as a freshman in high school—in 1984—the same year of Van Halen’s epic album of the same name. As 1984 came and went, we had some fun at Orwell’s expense, with the same derision the media had in 2012 for the Mayan calendar misinterpretation of the apocalypse. “Hot for Teacher” would blast from our jam boxes for another year before I revisited Orwell as required reading and again as an adult three decades later until I came to the conclusion that the title was the only misstep in Orwell’s prescient masterpiece. The similarities are uncanny from Osama Bin Laden as a Goldstein-esque enemy of the state, to the constant surveillance under the Patriot Act and Homeland Security, but there were no selfie sticks in Air Strip One, and if the cameras ever stopped watching in modern America we would shrivel up and die from lack of attention. Dystopian novels are not and should not be in the prediction game other than the reliability of humans to be humans.

Eighty-three years have passed since the publication of Aldous Huxley’s dystopian canon Brave New World in 1932. Huxley, whose face would go in the prominent position of George Washington on a Mount Rushmore of dystopian authors (though some would argue that Yevgeny Zamyatin deserves this position), preceded Orwell by 17 years, and upon receiving a copy of Nineteen Eighty-Four, Huxley agreed with the critics and praised Orwell’s work, but went on to explain to Orwell, in a letter, why Brave New World’s vision of the future was a more sensible and probable approach to keeping control over the masses. He ends his legendary correspondence to Orwell with this statement: “Meanwhile, of course, there may be a large scale biological and atomic war—in which case we shall have nightmares of other and scarcely imaginable kinds.”

With this statement in 1949, Huxley paints the backdrop for the post-modern, post-apocalyptic novel. Apocalyptic horrors that propel us toward our extinction are not always dreamed up from the sixty-sixth floor of a windowless office tower. We can imagine such events—we have witnessed them: the aftermath of Hiroshima, of Chernobyl and Fukishima, of famines in Sudan and wastelands where volcanoes have given the countryside a clean shave, earthquakes that have toppled cities and epidemics such as AIDS and Ebola that have struck fear into the heart of our world. Drill down on any one of these, extrapolate their effects, and you find an apocalypse in the making.

Tethering the bones of the dreamed-up cultural cesspools and dystopian wastelands are sinews, no matter how tenuous, of optimism and hope. If a story exists, and is told, after the world has descended into ruin, that infers that something survived to tell the tale. These stories underscore our understanding of ourselves, that we are much more likely to overcome calamity than to avoid it. Perhaps our passion for dystopian fiction is a glimpse into the doomsday-prepper that lives in each of us, a way we reassure ourselves of our own human will and capacity to survive anything.

The familiarity with our own time and place numbs our detection of the dystopia we live in, but we are acquainted with it. We read about it in the news, cry over it, squirm beneath the bureaucracies and injustices of police-state tactics and social inequality. We see it in the world. Dystopia resonates. It binds. The dystopian novel mimics microcosms of oppression found in all corners of our own world. It is a familiar song written in G-flat minor, performed in F-sharp major, foreign enough to make our ears twitch, keeping us enough at arm’s length to be entertained by our own folly, while still showing us our own resilience in the bleakness—road signs to how we can find beauty and hope in our world no matter what happens.

M.E. Parker is an award-winning short story writer, as well as the founding editor of the now retired Camera Obscura Journal, an international journal of literature and photography. A veteran of the U.S. Navy, he graduated from the University of North Texas in 1996 where, as a research assistant in physics, he built a proof-of-concept, zero-emission vehicle on a Volkswagen Bug chassis based on research of gas expansion and active wind resistance. Since then, he has worked in the information industry, specifically to find ways to reduce the cost of healthcare through analysis of trends in data. Jonesbridge: Echoes of Hinterland is his debut novel.