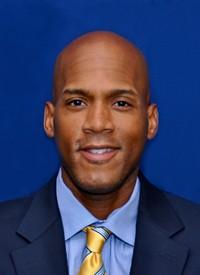 Director of Golf Operations Samuel G. Puryear, Jr. has been a leader within the golf industry by touching lives and instilling dreams. Throughout his 17 year career in the game of golf, Puryear has been able to maximize the potential in the young people that he has worked with. In addition to managing the men’s and women’s intercollegiate golf teams, Sam Puryear leads the 14-year-old Queens Professional Golf Management Program (PGM) in Charlotte, N.C. Puryear played collegiately at Tennessee State University, graduating in 1992 with honors.

Puryear kicked off his career in the golf profession in 1998 as the Executive Director of the East lake Junior Golf Academy in Atlanta, Ga. From 1998-2006, he increased enrollment from 150 to 1,000 students. Understanding the importance of junior golf in a community, Puryear has been a prominent spokesperson for the topic and directly impacted the revitalization of the East Lake community, which, at one time, was saturated with crime. His efforts garnered recognition from CNN, ESPN, the Disney Channel, Inside the PGA, and other media outlets. In addition to student development, he was responsible for the development and cultivation of key relationships resulting in large corporate sponsorships, and the creation of a pro-am event with the PGA Tour Championship.

From East Lake Junior Golf Academy, Puryear jumped into the collegiate coaching ranks as the first full-time men’s assistant golf coach at Stanford University in 2006. During his stay on the west coast, the Cardinals won the 2007 NCAA Division I National Championship, holding the No. 1 seed; two PAC-10 championships; and two NCAA West Regional Championships. Stanford climbed the polls during Puryear’s time there going from No. 42 to No. 1 in the Golfstat, Golf Week and Nike Coaches Poll. Administratively, he served as the tournament director for the Stanford Intercollegiate; operated three golf camps; conceptualized and developed the program’s first team-based leadership component. Puryear excelled at recruiting signing a U.S. China Cup team member, a second team All-American and a Junior World Team Member.

Success has followed Puryear to Queens University of Charlotte. The women’s program won back-to-back conference championships in 2011-2012 and 2012-2013, which are the only two conference titles in the university’s history. Puryear also led the men to a conference title during the 2012-2013 season. The Royals golf program continues success in the classroom with a plethora of all-academic performers during the past two seasons. Puryear brought his fundraising talents to Queens as well, and developed an athletic department golf tournament that benefits all sports.