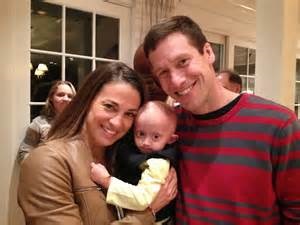 Laura and Ian Penny’s lives were turned upside down after the birth of their daughter Zoey.  After Laura experienced a relatively healthy pregnancy issues arose around her 38th week when doctors saw the amniotic sac wall coming apart and baby Zoey needed to be delivered right away.

At Zoey’s eight week check-up abnormal symptoms were concerning for both the doctors and her parents. After numerous tests over the course of several months and visits with specialists and geneticists, Laura and Ian’s daughter was diagnosed with an extremely rare genetic disease called Hutchinson-Gilford Progeria Syndrome, which affects 1 per 8 million births.

Progeria is a fatal disease that prematurely ages kids many times faster than normal. Children with this disease typically live to their mid-teens to early twenties, and unfortunately there are no approved treatments to cure this disease or even to slow down the progression.

Zoey’s parents knew they needed to find resolve somehow and arm themselves with information, and most importantly support, from others who understood what they were going through.  With support of their pediatrician Laura and Ian were directed to the   Progeria Research Foundation where they met and connected with other families who
were all too familiar with their experience.

The fight for Zoey and others with Progeria became a family affair.  Laura and Ian and Zoey’s grandparents, along with many others, brought to life Team Zoey, a website dedicated to raising money and awareness for the cause.

Zoey is a very happy, smart and boisterous child who loves to sing and play. Despite progeria, she is a funny girl who is full of life. While she does have some physical limitations she always finds her own way of getting around. Zoey goes to pre-school, which she loves, and balances her schedule with necessary medical appointments yet always finds time for favorite activities including arts and crafts, dancing and more.

Zoey’s parents and grandparents, along with other friends and family, continue the quest to find a cure for progeria by keeping Team Zoey alive with numerous benefits and activities to raise funds for medical bills for Zoey and other children living with the disease. Their network has grown and Zoey has benefitted from these connections and is now on three drugs as part of a clinical trial called  Triple Trial Expansion. Further, Team Zoey has since become the New Jersey Chapter for the Progeria Research Foundation.