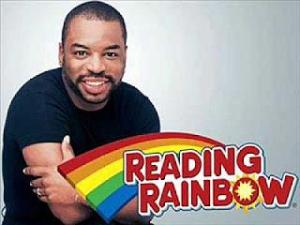 Burton was host and executive producer of Reading Rainbow starting in 1983 for PBS.[10] The series ran for 23 seasons, making it one of the longest running children’s programs on the network. Furthermore, the series garnered over 200 broadcast awards over its run, including a Peabody Award and 26 Emmy Awards, 11 of which were in the “Outstanding Children’s Series” category.[11][12]

Burton himself won 12 Emmy awards as host and producer of the show.[13] After Reading Rainbow went off the air in 2006, Burton and his business partner, Mark Wolfe acquired the global rights to the brand and formed RRKIDZ, a new media company for children. Reading Rainbow was reimagined as an all new app for the iPad in 2012 and was an immediate success, becoming the #1 Educational App within 36 hours. At RRKIDZ, Burton serves as Co-Founder and Curator-in-Chief, ensuring that the projects produced under the banner meet the high expectations and trust of the Reading Rainbow brand.[14]