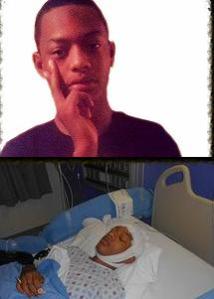 Wisdom Jones is a 16 year old gifted and talented young man; and school is very important to him. In his freshman year of high school Wisdom was on the A-B Honor Roll and also achieved a GA Studies Academic Award. In his spare time he loves to play video games and joke around with his brother Isaiah.

Wisdom also loves to draw and he is an amazing artist. He discovered filming shortly before his first epileptic event.

On June 6th, 2013 at 7:30 A.M, Wisdom had a Tonic Clonic (Grand Mal) Seizure for the first time in his life.  He was then admitted to the hospital and later diagnosed with a severe case of Epilepsy of his frontal lobe.  Wisdom has Tonic Clonic Seizures, Partial Complex Seizures, Non-Epileptic Seizures and a Cyst on his brain.

About a month before Wisdom’s first episode with the Grand Mal Seizure, he started to film, “My Life With Autism” in efforts to raise teen awareness and understanding of his disability. Unfortunately, the project has been put on hold until we can get his seizures under control.

While on this journey with Wisdom, we have discovered that there are several people who are going through very similar situations or know someone who is going through similar situations; however there is not a lot of awareness regarding Epilepsy/Autism Co-conditions.  So through Wisdom’s journey to healing we would also like to enlighten as many people as possible by using his “It’s About Wisdom” campaign by sharing statistics, resources, recent studies and basic information (raising awareness of Epilepsy/ Autism Co-conditions). It’s About Wisdom!! 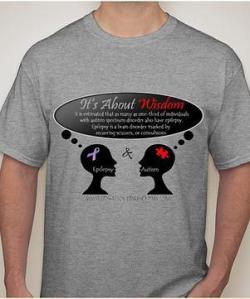 Donate: Click here or on the T-Shirt to purchase a 100% cotton, pre-shrunk, 6.1oz “It’s About Wisdom” T-Shirt from our Booster Campaign Site. Your T-Shirt will feature facts about Epilepsy/Autism Co-Conditions.

Wear the shirt and raise awareness Everywhere you go! Let’s meet and EXCEED our GOAL of 100 shirts sold! It’s About Wisdom!

Thank you for your interest in supporting “It’s About Wisdom” and wanting to spread awareness of Epilepsy and Autism Co-Conditions. Here is where you are able to make a difference in not only Wisdom’s life, but the lives of others that have the same experiences as well as their friends and family. You have the option to donate to the cause and/or purchase products to increase awareness while supporting the cause.

Your donation will bring us closer to our goal of reinstating Wisdom’s full bill of health while educating the masses on his current condition that effects many more than recognized. About one out of every 88 children in the United States currently lives with autism and about 1/3 of those diagnosed, also have Epilepsy.

Many business and community leaders are on board as well as hundreds of individuals. Our community is clearly excited and eager to see this project succeed. You can be a part of that excitement by supporting “It’s About Wisdom” with your donation. Every little bit counts, and teamwork makes the dream work! We are happy to acknowledge your donation on our website and at our numerous events if you would like.