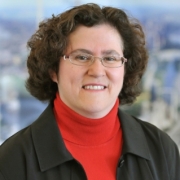 Giselle is a highly accomplished scientist who has worked tirelessly to improve the lives of students and early career colleagues. Almost single-handedly, Giselle stood up the first Postdoctoral Programs Office at Argonne National Laboratory (a postdoctoral job is an entry-level position in science after completing one’s doctorate).

Under her leadership, Argonne first broke into the Best Places to Work for Postdocs survey published by The Scientist magazine. Argonne debuted in the top 25 and rose to the top 5 within only a few years. In addition, Giselle has long played a leading role in outreach programs targeting grade and high school girls and has made core contributions to the Argonne Hispanic
Latino Club. Presently, she serves as the program initiator for the Argonne
Women in Science and Technology group.

Giselle Sandi received a PhD in electrochemistry and joined Argonne National Laboratory as a postdoctoral appointee in 1994. She led fundamental research in the areas of energy storage, materials for hydrogen storage, and electrocatalytic membranes. During the same period, she was an adjunct faculty at the Illinois Institute of Technology, where she had the
opportunity to mentor about eleven graduate students, who came to Argonne to complete part of their research work.

In 2007, she became the first coordinator of the Laboratory wide postdoctoral program, which has been recognized as one of the best in the country. In 2011, the UChicago Argonne LLC Board of Governors honored Giselle with the Pinnacle of Education Award
for her contributions and leadership in establishing Argonne’s postdoctoral program. She is also the recipient of the 2004 Luminary Award for Excellence in Science, Engineering, and Leadership, granted by the Hispanic Engineer National Achievement Awards Conference (HENAAC) as well as several awards from the Chicago Chapter of the Electrochemical Society.