Dr. Courtney Lyder the Dean of the UCLA School of Nursing is Today’s Honoree 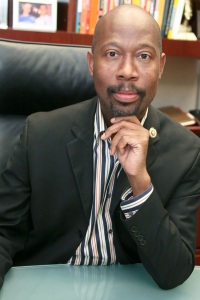 Five years ago Dr. Courtney Lyder, dean of the UCLA School of Nursing, became the first African-American male to be named dean of a U.S. nursing school, while holding the additional distinction of being one of less than 3 percent of U.S. deans younger than the age of 45. His story is one of perseverance and commitment.

When Courtney was just five years old, he moved from the island of Trinidad to the island of Manhattan in pursuit of the American dream. Within the next two decades he would earn a bachelor’s degree from Beloit College, and a bachelor’s, master’s and doctorate from Rush University College of Nursing in Chicago. Soon thereafter he became the first minority professor to earn tenure at Yale’s School of Nursing and the second-youngest member inducted into the American Academy of Nursing. From 2003-2008 Dr. Lyder served in various executive and clinical capacities for the University of Virginia Medical Center, while simultaneously functioning as a senior consultant to the U.S. Department of Health and Human Services where he played a central role in shaping federal policies related to the critically-important topic of elder care.

A close relationship with his grandparents inspired Dr. Lyder to advance the delivery of geriatric care. As a principal or co-investigator on numerous grants, Dr. Lyder has received nearly $12 million in research funding related to the healthcare needs of older adults. In one such case, Dr. Lyder co-led an investigation funded by the Centers for Medicare and Medicaid Services that identified how hospital errors affected the Medicare population. His findings influenced the government’s decision to stop paying for the treatment of preventable conditions that patients acquire in hospitals. In addition to his investigative work, Dr. Lyder has more than 220 publications, including books, book chapters, articles and abstracts. He has presented more than 1,000 lectures throughout the U.S. and abroad.

Since assuming his role in 2008 as dean of the UCLA School of Nursing, the school has embarked on an ambitious mission to “reimagine and redefine” nursing to present a much greater – and more accurate – understanding of the vital contributions of nurses. Dr. Lyder believes that while America’s nurses are taking on greater responsibilities in healthcare delivery (triggered in part by the shortage of primary care physicians and the influx of new patients through the Affordable Care Act), the public’s perception and the media’s portrayal of nursing is often outdated and incorrect. He considers it crucial that all those both within and outside the healthcare community understand the comprehensive role of nurses, not only as caregivers at the bedside but in such areas as clinical research, patient advocacy, ethics, social justice, international care and healthcare leadership. He aims to shift this paradigm through various articles, an annual “Nurses and the Media” conference, and the messages he shares with faculty and students at the UCLA School of Nursing.

Dean Lyder is truly a national healthcare leader, a respected researcher in patient safety, wound care and geriatric nursing, and a leading advocate for healthcare diversity. And amidst all this, he is one who is always ready to embrace a challenge.

Visit the UCLA School of Nursing for more information.