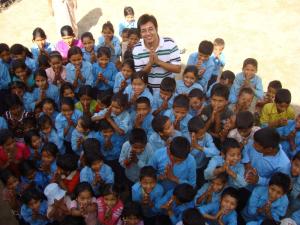 Nepal-native and Rollins College student Raghabendra KC (class of 2013), has provided a long-term fix to the water sanitation issue for more than 575 people in the rural countryside of Nepal.

Starting an on-campus organization at Rollins College in Winter Park, Fla. called “Making Lives Better,” KC embarked on “Mission Aqua,” a project in which he installed five non-electric water filtration systems to schools in Nepal with only a $550 grant and a plane ticket home. This highly impactful initiative allowed more than 575 Nepalese access to safe, clean drinking water – something most of us take for granted every day.

Upon his return to Rollins, KC inspired so many other students to influence sustainable change in Nepal that Making Lives Better coordinated a second trip in the summer 2010 semester. During this trip, several Rollins students saw hundreds of critical patients in a medical camp and helped rebuild a school whose walls were literally crumbling.

The students of Making Lives Better continue to raise awareness and advocate change in their third year, with another trip to Nepal scheduled this month, which KC is attending.  KC is an economics major at Rollins College, where he has maintained a 3.97 GPA. The College’s strong commitment to service is what compelled the Nepal-native to attend. He is the recipient of the Cornell Scholarship, a prestigious and highly sought after Rollins four-year scholarship that pays for tuition, room and board that is awarded to only 10 students every year.

Due to his commitment to world issues, KC was invited to attend the Clinton Global Initiative in April. There, he networked with world leaders and spread the word about Making Lives Better and Mission Aqua.