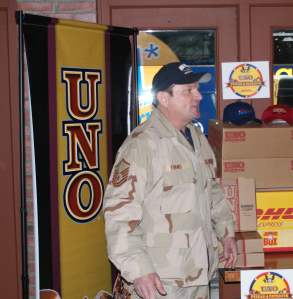 Retired Master Sergeant Mark Evans is responsible for masterminding the largest pizza parties in the world for U.S. troops through his non-profit, Pizzas4Patriots. Imagine being a U.S. soldier in Afghanistan, Iraq, Pakistan or Korea, longing for the comforts of home. Then imagine being surprised in your make-shift mess hall with a “slice of home,” Chicago-style deep dish pizza, from the good ole U.S. While we could just imagine this scenario, it has been taking place since 2009 thanks to the efforts of Mark Evans.

With the help of DHL and UNO’s Chicago Grill, over 70,000 pizzas have been distributed to the troops in the furthest operating bases (FOBs), to many on the front lines in very dangerous war zones. It all started in 2009 when Evans, who hails from Oak Grove Illinois, was eating pizza one night with his teen-age son, Kent. His son asked him what type of pizza he ate while serving overseas. Evans responded, “Son, we didn’t eat pizza. We ate whatever was in a box.” Kent thought it would be a nice idea to send pizzas to the troop. This comment sparked Evans to pick up the phone and call General Petraeus (Commander of the U.S forces in Afghanistan).

Within 12 hours of that conversation, plans for Operation Pizza Party had begun. Since 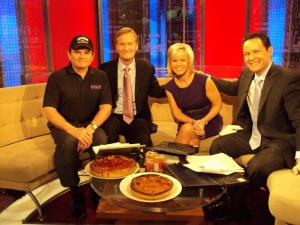 that time, over 70,000 pizza pies have been shipped to the troops for the 4th of July, Veteran’s Day and most notably, Super Bowl Sunday. This year, in a mission dubbed “Operation Not Forgotten,”

Evans, DHL and UNOs are launching their most Herculean effort to date. 10,000 pies, enough to feed 30,000 troops, will be received in time for the soldiers to enjoy while watching the Giants vs. the Patriots on Super Bowl Sunday.

Said Evans, “For many of our troops, the winter can be long and hard over there, and they look forward to the best football game of the season. Helping them to enjoy it with UNO’s deep dish pizza is a great way for us to say ‘thank you.”