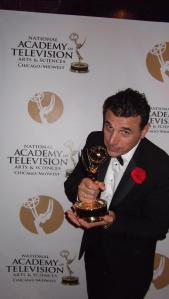 Mark  DeCarlo is a comedian, host and producer in LA, CA, with a hit Chicago show called Windy City Live that recently won him an Emmy for Outstanding Crafts Achievement for On-Camera Talent – Program Host/Moderator/Contributor.

Mark is very involved in different charities  and never turns down charity work when it comes to kids or the fight for a cure  for most major diseases. He mainly travels every year to give his time and money  to the Macon Georgia charity for the kids  cancer hospital there. He’s been going there for years and will always put  everything aside to go and cheer the kids up and sign autographs and do funny  voices. What people don’t get to see is that this hurts him every year, and he  is devastated by some of the stories and inspired by others.

How about food with a side of funny? Leveraging a comedic career on Los Angeles morning radio and a string of hit television shows (Studs, Big Deal, The X Show) Mark hit the road for the Travel Channel’s “Taste of America with Mark DeCarlo.”

For four seasons, Mark rode the road less traveled in search of delicious food and the unsung American zealots who champion personal recipes and down-home stories over mass produced mush. It took 400 cities, and a lot of napkins, but through it all, a portrait
of America… and its genuinely strange people emerged. These hilarious characters are profiled in Mark’s first book, “A FORK ON THE ROAD,” published by Lyons Press.

Mark is a comedian, host, producer and actor since becoming the all-time champion on NBC’s Sale of the Century, three months after his graduation from UCLA. He is also a cartoon voice actor, best known as the voice of Hugh Neutron (Jimmy’s Dad) on Nickelodeon’s hit series “Jimmy Neutron, Boy Genius.” Mark appears regularly on radio stations across the country – most notably his hometown of Chicago on Steve Cochran’s WGN Radio show, talking food, travel, and funny. He hosted the four seasons of the popular TV show “Taste of America” (2005-2008), following a multi-season
run on “The X Show,” “Sunday Dinner,” and the FOX dating show “Studs.”
As an actor, he’s appeared on shows such as “Seinfeld,” and “Curb
Your Enthusiasm,” and in films such as “Mobsters and Mormons” and “Buffy
The Vampire Slayer.”

His new series, EconomicalECO, is a humorous look at Eco Living… “for the 97 percent of the country that doesn’t gobble granola and live in a yurt.” Mark continues to travel the
country, performing comedy and music and eating the best food he can find. When
he’s not on the road, Mark and his Cubana amore live in the Hollywood Hills in
an energy-efficient eco-house… with a big screen TV and their puppy Nola.